Selakov was born in Belgrade, on November 8, 1978. She grew up in Sombor where she was introduced to the world of music. She finished Lower Music School, participated in numerous singing competitions, performed at jazz and rock 'n' roll clubs. In 1997, she started studying biology in Belgrade, but very soon she devoted herself to music. After biology, Ivana started studying "Recording and designing of the sound". She has appeared as a soloist at several festivals—Radio Festival, Beovizija 2006, etc. She did vocal back-up for many popular artists, she has more than 2000 back vocals did for other singer and bands. From 2016 she is judge in children's singing show "Neki novi klinci". She got many awards: best singer, best song, best album, best duet... Video for song "Daleko si" is one of most viewed on YouTube in Balkans. She is former member of the girlband Beauty Queens, in which she sang back vocals for Marija Šerifović, when she won at the Eurovision Song Contest in 2007. 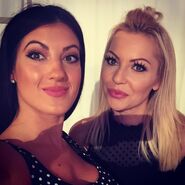