Biljana works as a conductor in the choir "Čarolija" and has also played in some movies and TV series. She is a lyrics writer for Disney movies since Moana. Her son Nikola Brun and daughter Iva Brun are also voice actors. Her maiden name is Filipović / Филиповић. 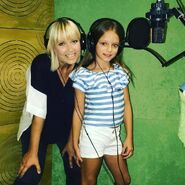 At The Angry Birds Movie premiere with Iva Brun.